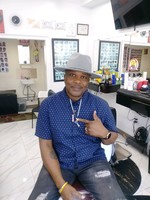 THE BEGINNING:
Washington Campbell was on February 26, 1956, in Georgetown, Guyana. He was born to Mona and Jacob Abrams. He lived amongst his 7 siblings: Jerome, June, Robert, Eris, Ricford, Nita and Hutson.
THE CHILDHOOD:
Washington also nicknamed, “Chiquita”, was an ardent soccer player and child fan for many years. He also played foe Western Tigers Team while living in Guyana. As a teenager, he took on the profession of barbering. Later he developed it into a matured skill. Along with his barber work he also took his time towards being a sign painter.
WORK:
With his life in mid-ages, Washington continued his barbering thus turning service into a full-time job. Later in his life he started a barbershop of his own named Chiquita Prime Cuts. Soon after he spent his time working at B.K. Designs.
FAMILY LIFE:
In his adult life, he was wed to Julia Riviere Campbell. He had 6 children, those of whom live in Guyana: Shen, Bingo, Isaiah, Abiolia, Tinisha and Tashana. Along with his 3 children: Liz, Kai, Maya in who loves in America. In his life he had 6 grandchildren: Jeremita, Dylan, Leroy, Leshawn, Jabari, and Tamara. He left behind his aunts and uncles: Denise, Edwin, Des, Trevor and Lionel.
PERSONAL DETAILS:
Washington’s friends and colleagues: Kerry, Mark, Fiona, Terry, Clai, Dolar and Ryan worked amongst him in his daily efforts of life. His close friends: Ron, Polo, King Midas, Troy, Sharon all helped him to become an even better person than he already was.
LEGACY:
This man had a heart of gold and anyone that met him loved him and his amazing energy. He was so happy and showed so much genuine love to everyone and made people smile. Always with a huge smile on his face making jokes and eager to help as many people as he could with a free cut. He was many things to those among him and a loving husband, a wonderful father and a cherished friend and associate.

All rights reserved. This obituary is also archived at obittree.com