To share your memory on the wall of Aggie Johnson, sign in using one of the following options:

Print
Ms Aggie Nora Johnson was born on April 13, 1949, to the late Mr. and Mrs. Robert Lee and Elizabeth Harrington in Laurinburg, NC. Affectionately known as Mollie, she received her education in the Scotland County school system where she expressed her ... Read More
Ms Aggie Nora Johnson was born on April 13, 1949, to the late Mr. and Mrs. Robert Lee and Elizabeth Harrington in Laurinburg, NC. Affectionately known as Mollie, she received her education in the Scotland County school system where she expressed her joy in learning. That experience would be seen later in adulthood as she would emphasize the necessity of a good education to all her children. Her christian foundation began at Reedy Creek Baptist Church in Laurinburg, NC where she was baptized by the late Reverend J.B. Everett. Following her family, she migrated to New York City where she joined Reverend W. L. Lundy at the Evening Star Baptist Church to continue in her christian faith. She was a phenomenal woman with a strong faith God.
From her matrimony to John C. Edwards, who proceeded her in death, three children were born, Joseph Lennie Harrington, Christina Smith and Regina Edwards. She was later married to John B. Johnson and his two children Stephanie and Jon Chris Johnson. From their union Jermaine Johnson was born. As result of this blended family we became affectionately known as "The Brady Bunch." Thus, here's the story of a magnificent Woman named Mollie....
After gainful employment after migrating to New York City in 1965, her entrepreneurial ambitions lead to her to a career as a Day Care Provider before embarking on her true calling as a proud foster parent in 1986, nurturing the lives of hundreds of children with diverse backgrounds indiscriminately with grace and dignity.
Her position in life was astute. She was strong-willed, with the determination to achieve her personal goals all the while breaking down so many barriers during her life journey. Her wit was sharp as a tack, with charisma that commanded the room. She was a strong black woman whom empowered and inspired those who was struggling to regain their identity and recognize their self-worth. Her integrity was unblemished. Her empathy and compassion for others was felt by everyone she encountered, which was on display on a grand scale; whether it was the support of neighbors, family members and at times strangers financially, a helping hand and or heartfelt words of wisdom, it had her personal touch. She was active in all her children's academic careers, not missing one ceremony, teachers conference and graduations. She was notorious to pop in to school to check on her children that even other students feared her arrival. Her veracious character, allowed to her stand out from the crowd. She was known to say..."If you have nothing nice to say about someone, don't say anything. But if it is the truth about them, tell it to their face." As the great author James Baldwin once stated... "The role of the artist is exactly the same as the role of the lover. If I love you, I have to make you conscious of the things you don't see." Anyone who had the great fortune to make her acquaintance created a bond and friendship that flourished until her departure.
Although not the eldest sibling, she was considered the matriarch of the family. She devoted much of her time and energy as a caregiver to family members, including her mother until she passed away. Feats such as this only highlighted her role as to what is the preeminent standard to what Daughter-Mother-Sister-Friend truly implies.
Ms Mollie was an avid activist in her community. She was an advocate for tenants rights during her years as a resident at Ebbets Field Apartments. She continued her activism when she moved to Bedford-Stuyvesant, leading her block association with extreme pride. She provided guidance and support to the homeowners and families in her community until her illness. And yet she did all this and countless other acts with little or no fanfare.
She was a phenomenal mother, not only to her six children, but to the hundreds of extended children she fostered whom came from diverse and arduous backgrounds. She embraced everyone no matter their race, ethnicity, religion, disability or gender identification as her own. She was affectionately recognized as the mother Ebbets Field to the younger generation. Even the local merchants knew her by name and showed her utmost respect.
Receiving her heavenly wings she is now reunited with her parents and siblings Sara Francis Harrington, James Robert Harrington, Lena Hasty, Michael Harrington and Mary Croney.
To continue her legacy, her memory will persevere along with her six children are her grandchildren, whom she cherished, Carina, Aaron, Marcus, Vaughn, Samantha, Ke'asia, Trevione, Chris Jr, Tremaine, Bryce, Deidre, Sanai, Julian, Jace, Jayden, Taylor, Cali, 5 Great grandchildren, her siblings Vickie Washington, Reverend Preston Harrington, Minister Eva Hickman, Jennifer Harris, Barbara Hickman, her only God-daughter Kimberly Carter as well as a host of nieces, nephews, cousins, in-laws and close friends.
Because of her humbling youth, mom strived for to accomplish one goal. To provide her children the life she never had; a proper education, to want for nothing, she instilled in us to cherish what we have, to be independent. The most rewarding gift to give us was her undying love and devotion. For this she is and will always be our Champion.
Read Less

To send flowers to the family or plant a tree in memory of Aggie N. Johnson, please visit our Heartfelt Sympathies Store.

We encourage you to share your most beloved memories of Aggie here, so that the family and other loved ones can always see it. You can upload cherished photographs, or share your favorite stories, and can even comment on those shared by others. 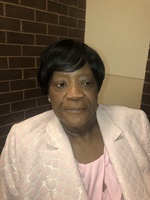