To share your memory on the wall of Jessie Govan, sign in using one of the following options:

Provide comfort for the family of Jessie Govan with a meaningful gesture of sympathy.

Print
I have fought a good fight, I have finished my course, I have kept the faith: Henceforth there is laid up for me a crown of righteousness, which the Lord, the righteous judge, shall give me at that day… II Timothy 4:7,8

Jessie Ja... Read More
I have fought a good fight, I have finished my course, I have kept the faith: Henceforth there is laid up for me a crown of righteousness, which the Lord, the righteous judge, shall give me at that day… II Timothy 4:7,8

Jessie James Govan was born on August 26, 1953 in Orangeburg, SC to Eartha Lee Govan of Brooklyn, NY and the late Sam Govan. He departed this life on September 20, 2019 in his home. He was preceded in death by his brother, Samuel (Bope) Govan, III.

Jessie attended Orangeburg High School and Orangeburg Calhoun Technical College. He was a member of the Masonic Order and was a proud veteran of the United States Army. Veterans’ Day was one of his favorite holidays. He was a true soldier in his heart!

Being a dedicated and very determined worker, Jessie worked for the US Postal Service and for numerous security companies throughout the years. He retired from the Internal Revenue Service as a facility employee. While there, he met his lovely wife, Deanna.

Throughout his various employments, he became the proud owner/proprietor of GOVAN’S CLEANING SERVICES, and with the help of his mother Eartha Lee Govan, his uncles Mack Butler and John Miller, his wife Deana and enthusiastic son, JD, the business was a blessed success! His biggest contract was with the United States Army base in Fort Hamilton, Brooklyn, NY as he provided janitorial services for the housing quarters for incoming soldiers. His weirdest contract was with a funeral home which he had no problem cleaning! Throughout the years of his great blessings from Jesus, Jessie employed several brothers in Christ to come work with him.

At an early age Jessie joined Cedar Grove AME church in Orangeburg, SC. He became a Deacon under the leadership of the late Dr. John Quincy Adams, Brooklyn. After a number of years of devoted service under Pastor Adams, Deacon Govan and his family joined the Mt. Sion Baptist Church following his friend, Rev. Dan Craig after he became pastor there.

Jessie’s proudest moment in life was watching his son Jessie (JD) excel as a professional athlete, and excel in his college academics, and he excel as a graduate from Georgetown University this past May! To make those moments more precious and blessed was for his dad to watch JD play (for just a little while) in the National Basketball Association; for the current NBA Champions—The Toronto Raptors—and then signing a contract to play professional basketball over-seas in Japan!

We encourage you to share your most beloved memories of Jessie here, so that the family and other loved ones can always see it. You can upload cherished photographs, or share your favorite stories, and can even comment on those shared by others.

Posted Sep 26, 2019 at 02:18pm
I will lift up mine eyes unto the hills, from whence cometh my help. My help cometh from the Lord , which made heaven and earth. Be encouraged my family. Love Judy and Larry Cleckley and Family
Comment Share
Share via:
YF

Your American Tool and Die Family

Your American Tool and Die Family purchased flowers for the family of Jessie Govan.

The Bronx Academy of Promise Charter School Family purchased flowers for the family of Jessie Govan. 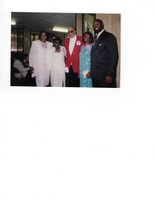